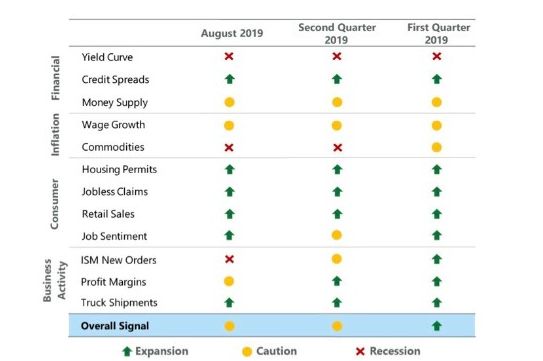 As we wrap up the third quarter, many domestic and global issues remain at the forefront of the market landscape.  Domestically we face Presidential impeachment proceedings, a slowing economy, and Fed interest rate decisions. On the global front, the US-China trade dispute, slowing China growth, Brexit, USMCA trade deal, and Iranian tensions are impacting commodity, equity, and fixed income investments. With this as the economic backdrop, many investors are concerned a recession is on the horizon for the United States. 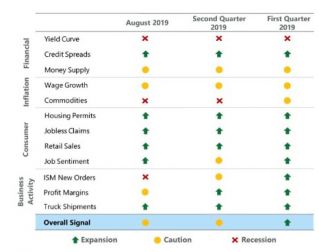 Source: Anatomy of A Recession;https://www.leggmason.com/en-us/advisor-resources/main/us-economy-anatomy-of-a-recession.html

On August 14th, one of the more widely followed recessionary signals were triggered, an inverted yield curve (10 year treasury rates are lower than 2 year treasury rates).  Historically, an inverted yield curve has preceded a recession in four of the previous five instances. Despite the inversion, Exhibit 1 presents many additional economic signs which are tracked and followed to determine the health of the economy.  As can be seen, there is evidence of an economy which is slowing. We see business activity deteriorating the most from Q1 while the consumer appears to still be strong.  We will continue to monitor these conditions to try to stay abreast of any further deterioration and the implications on investments. 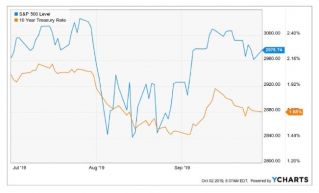 How did the aforementioned noise impact markets during Q3?  Volatility reared its ugly head with the VIX, a barometer for market volatility, hovering around 19 for much of August while 13 had been the average for July.  The drawdown for the S&P 500 was 6.1% from the 3025 high achieved on July 26th. An ensuing rebound has brought levels back to Q3 beginning levels, however.

The uncertainty in the equity markets and with the global economy led investors to flee to the safety of treasuries.  The chart below shows the steep drop in 10-year Treasury yields from the beginning of Q3, touching a low of 1.47%. As some of the fears resided, the yield has rebounded but remains 15% below the quarter-beginning levels.

Looking ahead to Q4, portfolios have elevated levels of cash which will be strategically deployed as opportunities present themselves.  We will look for entry points in higher quality equity and fixed income investments. Historically, October has been a more volatile month compared to others which could present the opportunity to deploy cash.  Additionally, Q3 earnings will kick off on October 15th when the large banks begin reporting. Close monitoring of CEO sentiment will be key to getting a feel for how many businesses and sectors view the economic landscape going into the final quarter and 2020.