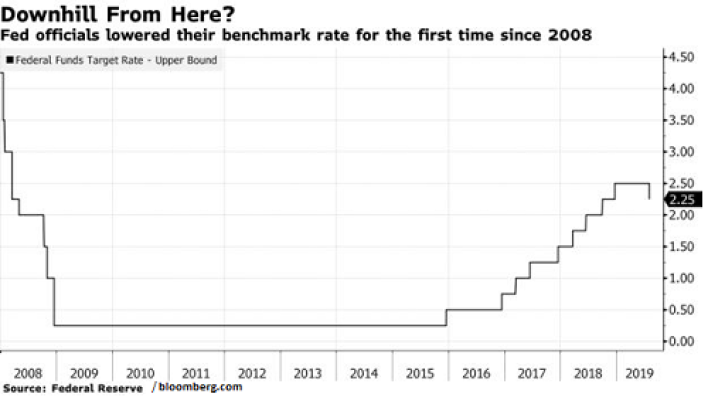 Federal Reserve cuts interest rates for the first time since 2008

Earlier this week the Federal Reserve announced its first interest rate cut in more than ten years. After raising interest rates (fed funds rate) from 0.25% to 2.5% during the course of the last 3.5 years, the federal reserve lowered the benchmark lending rate by 0.25%. The fed funds rate now stands at 2.25%.

While the overall US economic backdrop remains decent, the weaker cross-currents in the global economy led the Fed to announce this preemptive interest rate cut. Uncertainty related to US-China trade war and a below-target inflation reading in the US (below their 2% target) also contributed to this decision to cut rates.

With the federal reserve and other central banks around the world turning accommodative, there is hope that the current manufacturing-led global slowdown will stabilize before year-end.

The bad news is that interest rates around the world are already very low. Given the current global macro dynamics — aging demographics in certain economies and de-globalization trends — any additional monetary accommodation or rate cuts may not help boost economic activity or business confidence.

Financial markets are pricing in two to three additional rate cuts from the federal reserve over the next twelve months. At this juncture, there remains a disagreement amongst fed members and outside experts, whether they should further cut rates, especially when the US economy is doing reasonably well and growing above 2%. After a string of weakening economic data points in spring, the recent economic data released in July portends decent economic strength at this juncture.

Former New York Fed Governor, Bill Dudley, this week wrote about the risks of aggressive rate cuts in a Bloomberg opinion piece. “…there’s another risk: that of needlessly stimulating the economy when it is already growing at an above-trend rate and pushing bond and stock prices to new and perhaps unsustainable heights. By focusing on downside threats such as the uncertainties of US trade policy and foreign growth, the Fed might ultimately go too far. After all, the current level of short-term rates is already stimulative. If the economy maintains its momentum and inflation accelerates, the central bank could be forced to tighten again –- an abrupt about-face that could burst a financial bubble of the Fed’s own creation, increasing the chances of a painful recession.”

We concur with the views expressed by Mr. Dudley and remain somewhat concerned about the unintended consequences from additional rate cuts, especially when rates are already low.