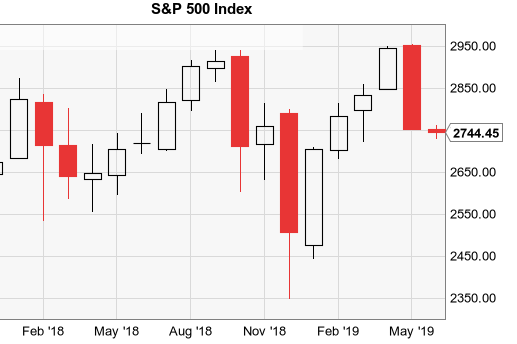 The old Wall Street adage, sell-in-May-and-go-away has lived up to its name this year. After a strong start to the year, most major stock indices were down 6 to 8% for the month of May. The good news is, despite this sharp sell-off in May, most major equity indices are still positive for the year, up +5% to 10% (as of May-end). Looking back a bit further in the rear view, the equity market is at the same level it was last spring (as shown in the chart above, for the S&P 500 Index). This is chart shows a stock market that is a bit tired on the upside and is waiting for a better fundamental backdrop to move higher.

The catalyst for this sell-off last month? Escalating trade war with China, restricting US market (supplier and end market) access for the Chinese telecom giant Huawei  — thus further increasing tensions with China, the announcement of new trade tariffs on Mexican imports, and softening economic data trends around the world.

Given the fundamental differences between the two sides, most analysts now expect the US-China trade war and the 25% import tariffs that both sides have announced so far, to be in place for a few months at least. The best hope of any de-escalation in tensions will come in late June when President Trump and Chinese Premier Xi Xinping meet at the G-20 Summit. Lack of progress during that meeting may lead Mr. Trump to impose tariffs on the remaining $300 Billion in Chinese imports that are not subjected to US tariffs yet.

Opening up a new trade scuffle with Mexico, due to the migration crisis at the southern border, by threatening to impose gradually increasing tariffs (5% to 25%) on the Mexican imports is an equally worrisome issue for US corporations and the financial markets. (Update: On June 7th, Friday evening, the President has suspended the planned tariff increase on Mexican imports as both sides have reached an agreement to tackle the migrant flow on the southern border).

Mexico and China are the two largest trading partners for the US; sustained high tariffs on imports from these countries will hurt all sides, marginally push up domestic inflation in the shorter-term, and further derail the economic momentum for this economic cycle which is now decidedly in its later stages, as it completes the tenth year of expansion that began in June 2009.

With these moves, President Trump is obviously is making a calculated political, economic, and security policy bet — and, expecting a positive longer-term outcome while willing to bear shorter-term economic pain. It remains to be seen if China will agree on a lot of these economic issues.

Recessions and major economic slowdowns are caused when a cyclically weakening economy is hit by an unexpected shock, such as — a war, natural calamity, major credit market event, or policy error. In the current economic backdrop, the escalation of the trade war with China and Mexico is the biggest threat to the economic expansion at this stage. Most experts and wall street firms now see a higher probability of a US recession in the next twelve months if there is no resolution to the trade issues by this fall.

The good news, against this volatile market backdrop and trade wars, is, the federal reserve is now (as of early June) hinting at a policy shift and possible interest rate cuts later this year. Financial markets are now expecting up to two interest rate cuts from federal reserve later this year, assuming economic backdrop continues to weaken further, amidst the trade wars. This will help soften the impact of the trade war and help boost economic and market confidence.

We have been cautious about the equity markets since earlier this year, and we continue to hold extra cash, parked in the money market or short-term bond funds/ETFs in most of our client accounts. We intend to gradually deploy some of the cash as and when investment opportunities arise during the summer months. However, we will continue to be tactically defensive until the trade issues are resolved.